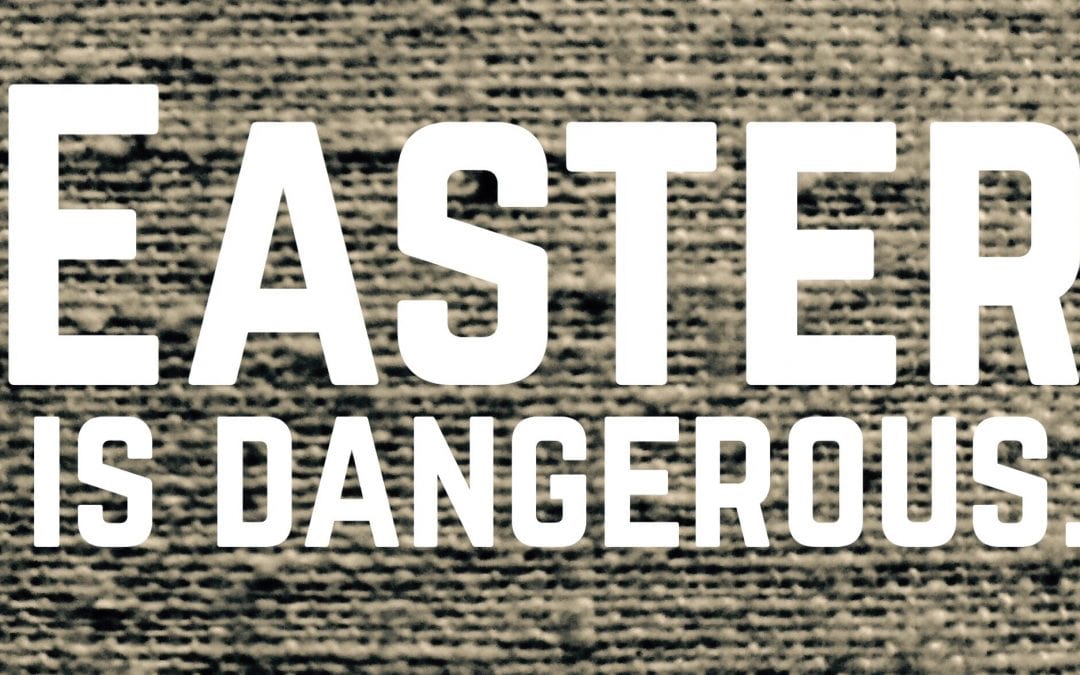 My son is terrified of the Easter bunny. I mean, terrified. I’m talking running with his little legs to the other end of the mall terrified. I get a good laugh out of it, but for our family it means that any Easter celebration has a little bit of an edge – if someone shows up in costume, our kid is out. Gone.

I kind of like Easter with an edge. All the pastels and baby animals give it such a safe, cuddly vibe. When you do a google image search for Easter, the entire first page is all eggs, bunnies, and candy. Easter has been transformed into a safe, clean, marketable holiday that comes and goes with the same underwhelming fury as St. Patricks Day.

Which, given where Easter started, is pretty shocking. The first Easter was anything but safe. A man claiming to be God was executed by the government in the most horrific means possible, and three days later, he is back from the dead. Not only this, he is teaching his small band of followers a message that is nothing short of a revolution – that a kingdom is being born into the world that would bring about the restoration of all things. That small band of ordinary followers, empowered by the presence of God within them that was promised, literally turned the world upside down.

Have you ever stopped for a minute to think about what this means if it’s true? If the resurrection of Jesus is true (and we believe that it is), nothing remains the same. Everything is now centered on the One who has been resurrected.

On a personal level, the resurrected Jesus deserves our devotion in a way that a nice teacher or prophet simply doesn’t demand.  Whether you agree with his teaching or not, a risen and Jesus has to be reckoned with. In the same way that our measuring of time itself hinges on his birth, the reality of his resurrection means the meaning and practices of our life now hinge on who he is. Everything we know about our humanity has to be reconsidered in light of him.

On a larger scale, the risen Jesus’ kingdom now deserves an allegiance beyond our national loyalties, and the laws of his kingdom (The Sermon On The Mount, for instance) are more foundational than those of the world around us. Love overcomes hate. Peace overcomes violence. Justice overcomes injustice. A resurrected Jesus isn’t a figurative king of our memory, he is the living king of our present and future. Everything we know about our world and it’s ways -our politics, ethics, and social structures – must be reconsidered in light of him.

The future has invaded the present. The kingdom of heaven is crashing into earth. Everything is different now. As N.T. Wright says, “Jesus’s resurrection is the beginning of God’s new project not to snatch people away from earth to heaven but to colonize earth with the life of heaven.”

And this, my friends, is a dangerous message. The status quo that we strive so hard to maintain in our world? It’s days are numbered. It’s why we like to keep Easter safely wrapped up in bunnies and candy – the real Easter changes everything. Wright goes on to say, “We could cope—the world could cope—with a Jesus who ultimately remains a wonderful idea inside his disciples’ minds and hearts. The world cannot cope with a Jesus who comes out of the tomb, who inaugurates God’s new creation right in the middle of the old one.”

So if Easter is true – and we believe it is – gathering together this weekend to celebrate the Resurrection may mean more than you realize. This isn’t a memorial service, it’s a revolutionary rally. This isn’t an elaborate pageant, it’s the meeting of heaven and earth among us. If Jesus is alive, we have the honor to gather in his power to be restored, and as we leave, we go as restorers of his new world. We are the resurrection people. We bring heaven to earth.

I hope you’ll join us Sunday night at 5:30pm, and I hope you’ll bring a friend. We believe the resurrection changes everything, and because of that, there’s work to do. See you Sunday night!