Calling Off The War On Christmas 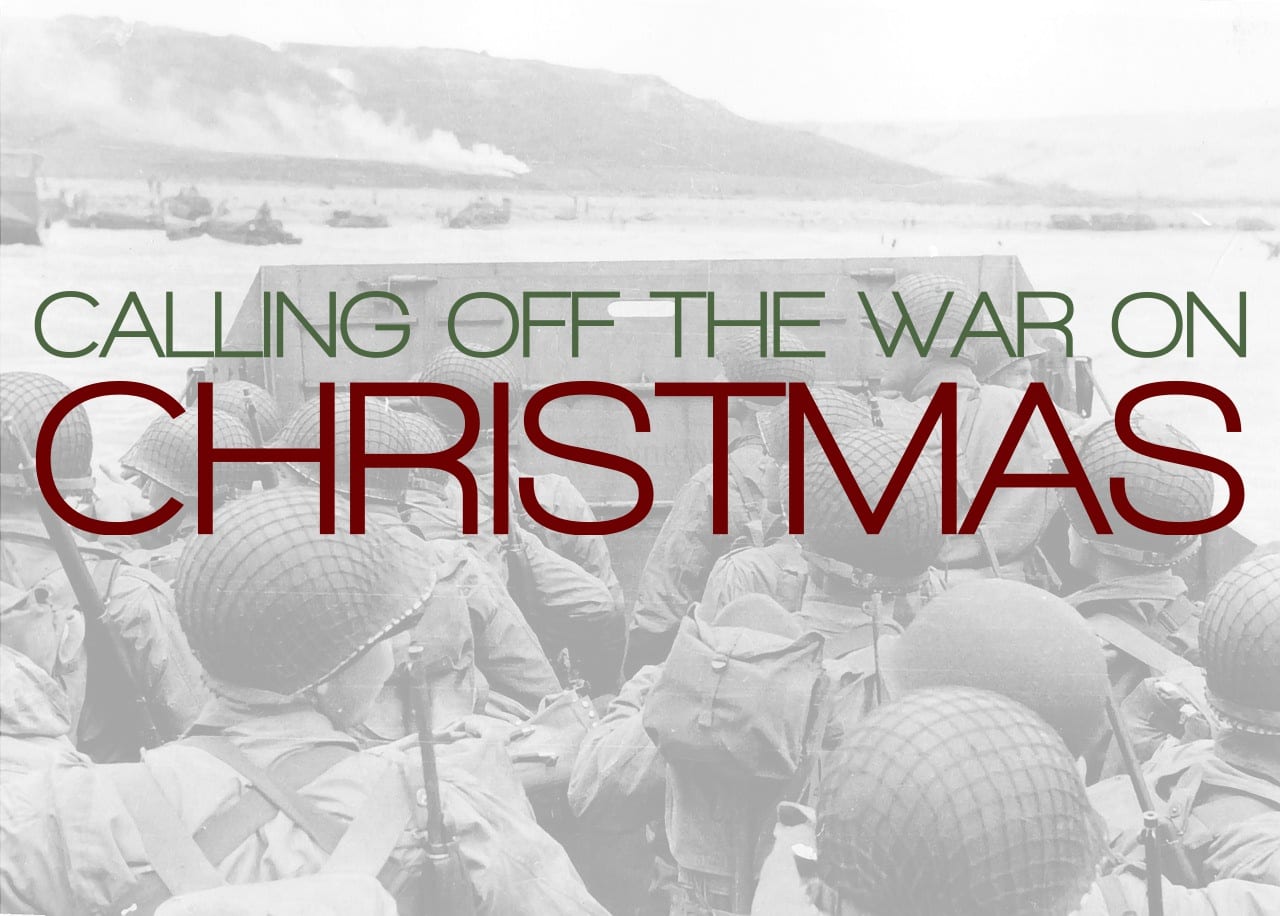 Yesterday on Facebook, I waded into a somewhat tired controversy that seems to never go away for some reason. It’s the supposed “War On Christmas,” the idea that the fundamental celebration of Christmas in America is being undermined and rejected for more of a secularized, sanitized version of the holidays. Here’s what I posted.

I ask in love and genuine curiosity:

Why would Jesus care who does or doesn’t say Merry Christmas?

Please, no political talking points or power moves. Give me *theological* reasons.

And if He doesn’t care… why should you?

It’s true: I genuinely want to know what the reasoning is behind this controversy. Over the last few days, I’d seen several posts about “bringing back Merry Christmas” (it gets the outrage clicks this time of year), and I wanted to know what theological viewpoint formed this assumption. In the responses, only one person reported having a retail company telling them not to say Merry Christmas. No one else could give a real-life example of this supposed holiday suppression.

But that’s not what I’m interested in anyway. What fascinates me is the assumptions we (maybe unwittingly?) make about the character of God by living as if this is true. From what I can tell, this is the story that’s being told within the controversy:

Christmas is under attack. Secular forces want God to be absent from the public square, so they are forcing us to say “Happy Holidays” and ignore our Christian beliefs. As a result, “Christ” is being left out of Christmas, and Christians are being prohibited from practicing their beliefs.

Maybe I’m wrong, but I sense a predominant narrative that drives these controversies. Underneath it all, there seems to be a sneaky feeling that something – slowly but surely – is being lost. Prayer in schools, public respect, political power, and cultural influence seem to be wavering. The threat of this loss leads to suspicion, fear, and a stubborn insistence to fight for what influence and power we once had. And when anyone pushes back on this narrative, they’re just another example of the attempt to suppress our beliefs.

So… is something being lost? Are the fears of these well-meaning men and women warranted? The truth is, something is being lost. With the rise of technology and globalism, almost everyone has access to learn from competing ideas, religions, and worldviews. America is a growingly pluralistic nation, and even here in Kentucky, we are seeing a cultural shift that is reshaping the way we see the world. We are not the only voice in the cultural landscape. Suddenly, we are sharing the microphone with other people who are very different from us.

And honestly, I genuinely understand why this is scary to so many. Change is hard. Technology has not only given a voice to all of us, it’s brought out the worst in all of us. The ability to see so many different perspectives has empowered the broken parts of us that lie about our own superiorities in the face of others. People aren’t just wrong, they are evil. Christians have done far more than necessary to merit a bad reputation in many circles, but I, too, get frustrated with the caricatures, intentional misrepresentations, and outright distortions of our beliefs that have reared their ugly head in these times.

And so when you say “Happy Holidays” in this understanding of the world, it’s just another change in a pattern of cultural shifts that can feel like a threat to the world you knew and the world you happily remember. There is a longing for the simplicity of not having to navigate cultural differences and competing worldviews. So much can come at us, so fast. It’s exhausting. And to you, I say this: I love you, and I understand.

But I love you enough not to let you live from a place of fear. The powers and principalities of this world – both visible and invisible – want you to live in fear. They know your fear will drive up ratings and get clicks, likes, and shares. In short, lots of powerful people are making money off of your continued fear of a shifting world. If you are a follower of Jesus, the perfect love of God drives out fear (1 John 4:18). We’ve not been given a spirit of fear, but power, love, and self control (2 Timothy 1:7). Fear of change, fear of our neighbors who are not like us, and fear of our future are antithetical to the way of Jesus.

I am not arguing for you to settle into the world as it is, slowly losing all distinctiveness of your belief and identity. I’m also not encouraging you to hole up and segregate yourself from the ‘evil,’ changing world around you. What we need is a strategy for how to live out our faith in distinct and yet compassionate ways in a pluralistic world. And wherever might we find that?

That, my friends, is the entirety of the Bible’s Story. The Bible isn’t written from the perspective of a people in power fighting not to relinquish it. It’s written by a marginalized people who suffered under oppression for almost their entire existence. The most culturally fruitful season in the life of Israel wasn’t in power, but rather in Exile under Babylon, where leaders like Daniel lived as distinct worshippers of Yahweh while also blessing those who ruled over them. This was the period where the Old Testament was written down and the future of the faith was formed.

The same is true for the New Testament, where the Church formed and thrived in a pluralistic society not unlike our own. The Church grew from a few hundred to tens of millions in a period of around 300 years by living as an alternative society that didn’t shrink back from the world, but loved it sacrificially like the risen Jesus they followed. The highly secular society around them did not cause them to fight back in fear, even in persecution that our American experiences of ‘struggle’ can’t come close to touching. As Scott Sauls says, Historically, Christians have most influenced society not as some sort of ‘moral majority’ but as a life-giving, love-driven minority.

I understand that the world is changing fast, and it’s incredibly hard to keep up. That alone is scary. But like the Christians of the past, let’s embrace this as an opportunity to show Jesus in a unique way to our pluralistic world. Have we lost cultural power and influence? Absolutely. But let me be clear: our loss of power is not God’s loss of power. If anything, this cultural moment is a chance to renew our faith in the power of God as he sovereignly works all things for our good and his glory. God is not threatened, he’s not panicking. He never ‘left our schools’ and he’s never ‘coming back to America,’ and this is good news! God doesn’t dwell in countries or schools. He dwells in his people, who carry his kingdom in governments and institutions faithfully in every culture and time.

So may I suggest that we lay down our weapons and call off the ‘War on Christmas’ counterattacks? Our constant offense and fear is hindering our ability to love both God and neighbor. In the ways of Isaiah 2:4, let’s beat our cultural swords into cultural plowshares and get off the “Us vs. Them” merry-go-round. It may entertain us, but it’s getting us nowhere. What our world needs now is an un-anxious community of people committed to a distinct, Jesus-shaped life together marked by hospitality, humility, and love for our enemies.

To the soldiers in the War on Christmas: you are being redeployed to the front lines of a different battle – the battle that is not against flesh and blood, but the powers and principalities that seek to rule over us in fear. As a people formed and being perfected by Perfect love, that fear no longer has a place. Our new life begins now as we lay down the megaphones and take up our cross.

This post was written by Justin Rhorer, pastor at Restoration Church. he can be reached at justin@restorationlex.com