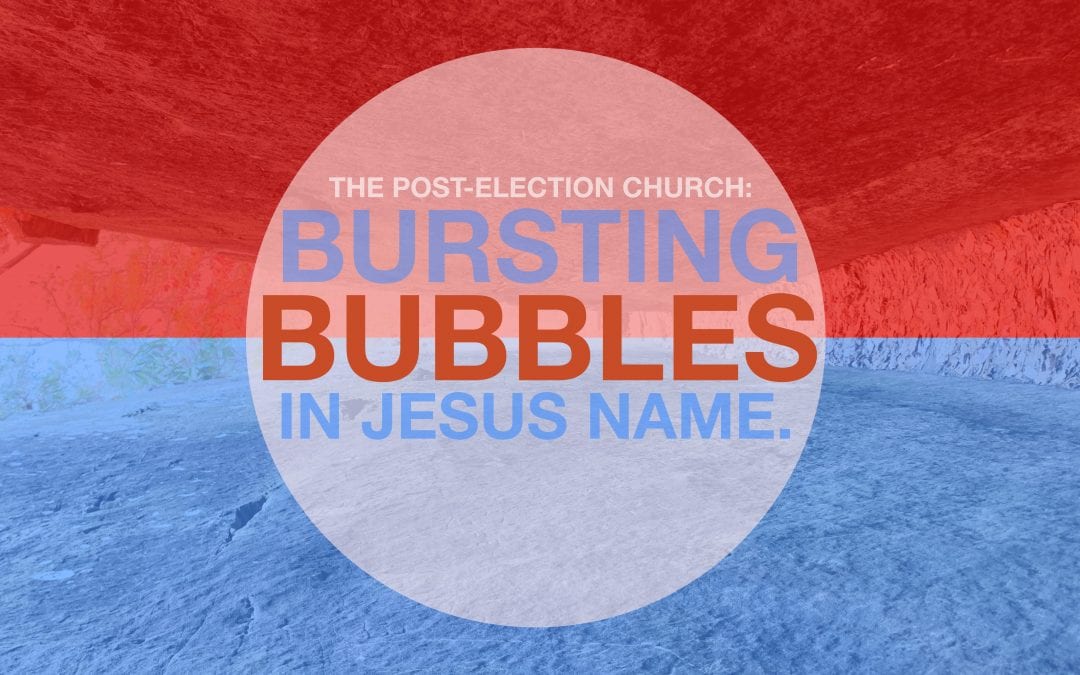 Our first official service as Restoration Church happened Sunday night, January 22, 2017. This was the night before the inauguration of President Trump, and the tensions in our country were palpable. As a Church setting out to seek and value ethnic, socioeconomic, and political diversity, it felt (to me at least) like paddling a kayak in a hurricane. The division in our country was a low rumble beneath us, even while we called and pushed for love that extended beyond our “side.” 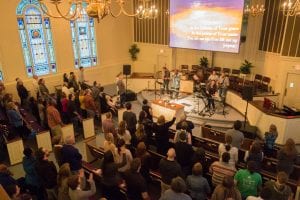 Within the first month, a family left for what they perceived to be a partisan agenda among our leaders from the stage. And over the next 3 years, others came and left Restoration for similar reasons of not meeting their political and cultural expectations (from both sides, I’ll add). Any church planter expects people to leave your church – it just comes with the territory. But these instances were honestly painful for me – because it felt as if voices outside of our community and faith were defining and upholding boundaries that we were trying to tear down.

And now, almost four years later and another election soon to be behind us, I find myself looking ahead as a pastor to what we will be – what we can be – as the dust settles. The divisions still exist around us, and some have grown even deeper. As a Church with democrats, republicans, and everyone in between, we had a weekly reminder of hops, as men and women stood in line for the bread and the cup, political opposites receiving the redeeming love of Christ together as one family. It’s easier to remember we’re family when we’re in the same room. But because of COVID-19, we’re not.

So for 8 months, our primary experience of one another has come through screens. While this has been difficult, we’ve fought through it and have truly grown as a family. But the darker side of having our screens stand between us is that those same screens allow us to settle into echo chambers of our choosing, and the voices of hot-take cable news, partisan agendas, and Facebook posts serve as the mediator between ourselves, our fellow church members, and our neighbors. Brothers and sisters in the family of God stand on opposites sides of battles they themselves never signed up for. “Either/or” thinking co-opts Jesus’ kingdom vision with a party narrative, while listening becomes seen as compromise and love becomes betrayal.

So as I’ve pondered and prayed for the year ahead, one thing has become abundantly clear in our mission moving forward: I believe the Church is the place where we burst bubbles in Jesus name. What do I mean by this? Well, let me explain. In a world where our TV screens and our phones and computers have become the primary lens through which we see our neighbors, we all find ourselves settling into ideological bubbles. On social media, we like, share, and amplify those who think like us. On TV, we watch and listen to voices that uphold what

we already believe. And these bubbles feel safe in a chaotic world – which is good! But they often insulate us from and distort reality we need to see.

Call me naive, but I don’t believe that the church of Jesus Christ should be a place where those bubbles can remain safe and untouched. A faith that celebrates a day when every tribe, nation and tongue will gather at the throne of God should be tearing down every wall that separates tribes, nations, and tongues in the world around us. We don’t do this to create a false unity, but rather to see our world through one another’s story clearly – sometimes for the first time. Instead of the pundit on TV providing the definition of what qualifies as racism, I want the stories of our brothers and sisters in Christ to be authoritative. Instead of the Facebook post generalizing and dehumanizing those who voted for ________ as being evil, we follow Jesus into their story and hear what pains and hopes have led them where they are. Instead of a meme that claims how the poor need to stop being freeloaders, we learn from serving with the poor how their story is far more than what political lobbies make of them. Stories, up close and personal, always put our echo chambers at risk.

The truth is, the safety of our ideological bubbles will fundamentally distort the way we see Jesus and his kingdom. And if there is any hope of justice and reconciliation in our country, it will start and grow from a Church that is brave enough to let their bubbles be popped so that they can see and love clearly in a complex world. Outside of our bubbles, the stories of our brothers and sisters hold the weight that the pundits and prognosticators once did. The Church truly becomes our politics – locally, in the flesh, together. Call me naive, but this is what I’m fighting for as we move forward. I have no interest in a Church that aligns with the left and the right, but I am longing for one who aligns with a radical love for God, our neighbors, and our enemies. I believe the words of Stanley Hauerwas, who tells us:

“The church does not exist to provide an ethos for democracy or any other form of social organization, but stands as a political alternative to every nation, witnessing to the kind of social life possible for those that have been formed by the story of Christ.”
– Stanley Hauerwas

Restoration, dream with me. As we move towards our fourth year together in January, I believe our world needs an upending community who defies the expectations of a divisive world. I believe we need it. It begins with an acknowledgement: on our own, we can’t see our world and our faith clearly. We need the eyes and the voices of others in the family of God to see a clearer picture of the not only the world, but ourselves. And for that, our bubbles must burst, leaving the safety of our echo chambers to risk seeing our world and our neighbors through the eyes of Jesus. The Church we dreamed of 4 years ago is the Church we desperately need in our moment: to be a people who build up in a tear-down world. Restoration wasn’t just a clever name, it was a calling. By God’s Spirit, I still believe we can be this. Let’s get to work!