“I Saw You At Church.” On Gathering In A Bright Room.

It’s funny where a story takes you. It’s true with books, it’s true with people, and it’s true with churches. The church we planted two and a half years ago looks very little like the one we envisioned, and has found us in a place we did not expect – and yet love. We entered into our partnership with the Lyric Theatre in December of 2017 after 11 months on Sunday nights in Grace Baptist Church. Grace was a classic, earlier 20th century church building that had a lot of charm, but swallowed us up. And the room we were moving into – the Lyric Community Room – was big, but cozy and way, way more bright.

Church on Sunday morning in a room with lots of windows and sunlight was a big shift. It wasn’t as if our services at Grace were shrouded in darkness, but evening services and some marginal lighting controls allowed us some flexibility. At the Lyric, we had two options: bright or brighter. Honestly, I didn’t think twice about it; in fact, I immediately loved the sunlight pouring into the room. I hadn’t been a part of a Church with a room this bright since the stained glass windows of my childhood. Somehow for me, the room felt really new, and yet harkened to some memory of Church that was very old – even being in a theatre community room.

Now a year and a half into our time at the Lyric, I’m beginning to see the shape of the community God is building at Restoration. Being downtown in the East End, there are immediately cultural barriers to those who may have a slight… well, nervousness, with life outside the suburbs. But for the most part, we’ve not experienced that. Instead, in both spoken and unspoken ways, I’ve noticed that one of the biggest cultural barriers some folks face walking through our doors is – you guessed it – a bright room.

And I know where they are coming from. In the decade prior to planting Restoration, I was a part of churches that, like most so many in modern America, had done everything in their power to make their room dark. The bright, stained glass sanctuaries with altars and pulpits had been replaced by dark, projection-oriented rooms with stages and 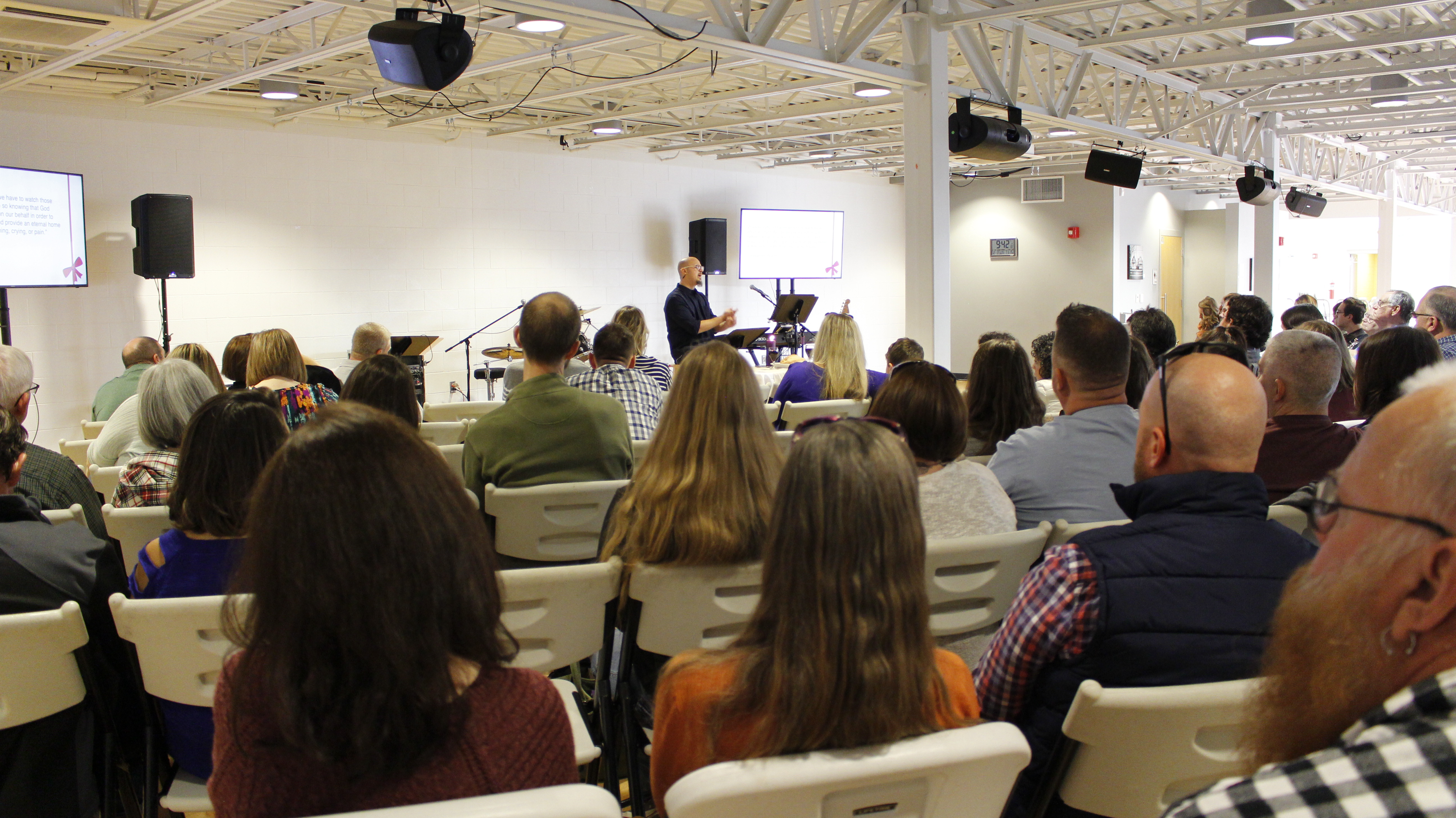 spotlights. Architecture shifted over the last half of the 20th century, and more and more churches made the shift to looking less like a sanctuary and more like a theatre. Not only did this help illuminate the band and speaker on stage, it helped seekers remain at whatever level of anonymity they desired.

For some, seasons of anonymity are healthy. I’ve known several folks who, after struggles with divorce, infidelity, miscarriages, or other circumstances, go through seasons of not wanting to be seen. It’s enough just to show up, let alone get in a conversation with a stranger. Dark rooms allow you to sneak in during the second song and sneak out during the last – and never be seen. But there lies a problem when anonymity stops becoming the exception and becomes the norm. If Church is simply a service we attend on a weekly basis, attending anonymously barely makes a difference. But Church is people. Church is family.

Hear me clearly: I am not placing higher spiritual value on brighter rooms. I am not claiming to have reached a “purer” version of Church because we choose simplicity in our services instead of lights and fog machines and the like. Based upon our values in regards to budget, mission, and community, we’ve made intentional choices about what we will and will not do in our services. At heart, things like dark rooms and stages and bright lights are cultural. They are a part of one specific church culture among many. (It took me spending time outside of a typical white, evangelical church culture to understand this.) The same is true for those who wear suits and dresses to church every week. Is it wrong? No. It’s just cultural.

One of my favorite sights every week is watching the line of people walk forward to receive communion. In these lines? Frazzled moms, addicts clinging to a few weeks of recovery, doubters and skeptics, homeless folks, rich, poor, and everyone in between. Different stories, different spiritual journeys, united in the body and blood of Jesus among a messy yet beautiful, growing Church. And the best gift we can offer people as we worship is the opportunity not just to be present, but to be seen. Wherever God sends us, wherever and however we meet, that’s the beginning of love taking root.