I Am A Part Of Restoration: My Story 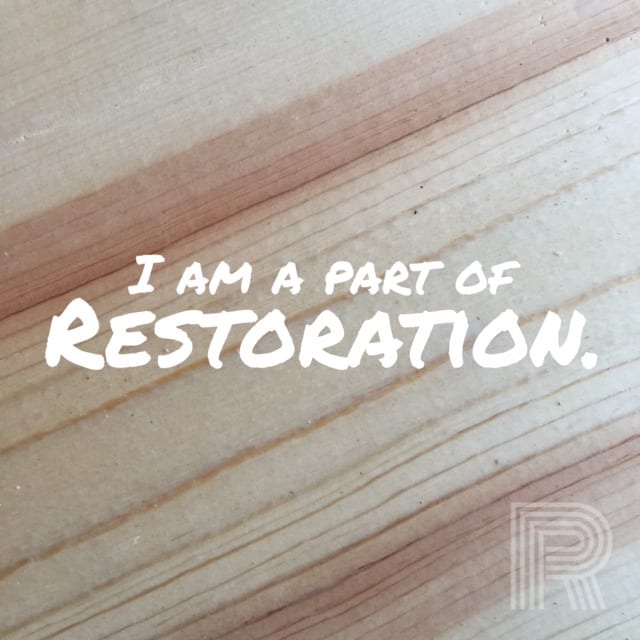 May 9th, 1995. It was a Tuesday night. I walked down the aisle of a little country church during a revival service and told the preacher I was ready to be a Christian. Earlier that night I had prayed with him and another pastor to accept Christ as my Savior. That night my decision became public, and a week later, I was baptized.

It’s the “and then” that always ate at me. After that night I was spiritually adrift, with little more to go on than simply go to church, learn more about God, and don’t do bad stuff, and go to heaven when I die. That was the totality of the Christian life as I knew it. And for a while, that’s what I tried to live. I was in church every time the doors were open, I learned more facts about God, and I was a well-behaved young man. What else was there?

For the better part of the next 15 years I lived in the confines of this worldview. As a young man in high school I felt called to Christian ministry. This continued in college and beyond, where I quickly entered full time ministry. For what I knew, I was being charged to get people to church, help them learn about God, not do bad stuff, and going to heaven when they die. And in many settings, I was “successful” in this pursuit. But in my heart, the same feeling of spiritual emptiness ate at me.

I “knew” more, I did more, but my heart didn’t seem to change.

I saw it in the people I was leading too. They were wonderful people, active in the church and passionate about getting people there to learn about God, but conversations and questions removed the illusion of success, and I saw in many of them what I saw in myself – a Christian-ish life without Christ and His Kingdom mission.

It was here that I experienced a second conversion of sorts. Jesus began showing me that I was made not just to know about him, but to know him and follow him. I discovered the call of every Christian was to be a disciple, or an apprentice of Jesus, becoming more and more like him in character and competency.

On top of that, I discovered Jesus’ primary message in the gospels – the kingdom of God. This kingdom was the in-breaking of heaven on earth, inaugurated in his resurrection and brought in fullness upon his return. As his disciples, announcing and demonstrating this kingdom here on earth was at the heart of our mission. Instead of just getting people into heaven, we were called to get heaven into people. And as disciples, filled with the life of heaven, we would be the hands and feet of bringing heavens realities to earth.

As disciples then, filled with the vision and power of Jesus and his kingdom, we run towards issues like racial injustice and poverty, not away from them. In our neighborhoods, school, jobs, and everywhere in between, we believe we are the hands and feet of Jesus’ mission to bring restoration. But it starts with us. We recognize we can’t offer our world a restoration we aren’t experiencing ourselves. And so together, we follow Jesus and experience his transforming power in the everyday stuff of life, being restored one day at a time.

The story God is telling is a restoration story. He is restoring people who restore the world. That’s why, in early 2017, we are launching Restoration Christian Church. We dream of being a community that tells God’s restoration story though transformed lives, transformed neighborhoods, and transformed relationships. As we seek Jesus and his kingdom together, we believe God is going to restore people who restore the world. If you’re new to faith, burnt out, questioning, or just ready for a mission bigger than yourself, we have a story to tell here in downtown Lexington.

As we head into 2017, I hope you’ll join our restoration story. Stay tuned as we move closer and closer towards our launch!