How To Miss Jesus At Church 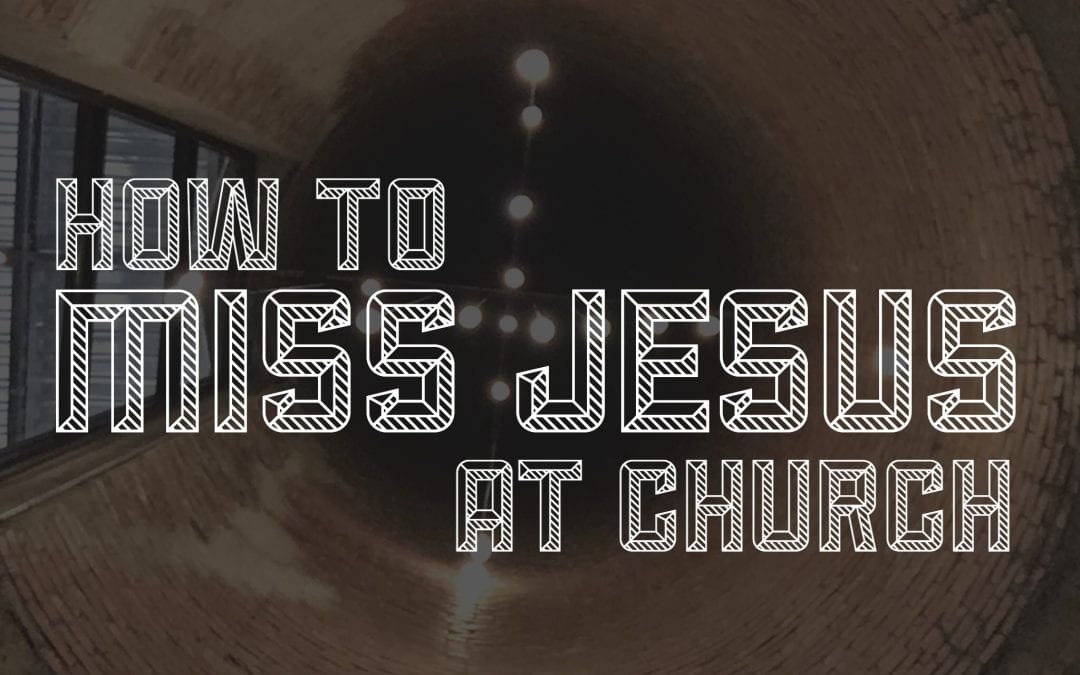 When you pull out the nativity scene to set up around Christmas, Anna and Simeon are nowhere to be found. In fact, I can’t remember a single sermon on these two people who, in terms of the greater Christmas story, are barely a blip on the radar.

They appear on the scene in Luke 2 as Mary and Joseph take the baby Jesus to the temple for the purification rites called for in the Law. The temple was the center and heart of the Jewish people – a buzzing, crowded, beautiful structure filled with prayer, commerce, sacrifices, and community life. It was a massive structure, with the ability to hold as many as 100,000 people. So when you picture this scene, imagine a poor, teenage mother, her faithful husband, and her newborn child walking into a packed football stadium – an otherwise unnoticeable little family trying to make their way through the massive crowd.

But this wasn’t any ordinary child that was carried into the temple that day. Think about it – how many people, in their hurry to pray, shuffled past the very one to whom they were praying to? How many carried their sacrifice past the One who would one day be the sacrifice for them?

There’s something astounding about God Himself in flesh being carried through the temple unnoticed. Unnoticed, that is, except for Anna and Simeon. We meet Simeon first.

Now there was a man in Jerusalem called Simeon, who was righteous and devout. He was waiting for the consolation of Israel, and the Holy Spirit was on him. 26 It had been revealed to him by the Holy Spirit that he would not die before he had seen the Lord’s Messiah. 27 Moved by the Spirit, he went into the temple courts. When the parents brought in the child Jesus to do for him what the custom of the Law required, 28 Simeon took him in his arms and praised God, saying:
29 “Sovereign Lord, as you have promised,
you may now dismiss your servant in peace.
30 For my eyes have seen your salvation,
31     which you have prepared in the sight of all nations:
32 a light for revelation to the Gentiles,
and the glory of your people Israel.”
Luke 2:25-32 NIV

In terms of years, Simeon had most of his life behind him. But in terms of his heart, when he held the newborn Jesus, his life – his whole life – was right there in his arms. Everything he’d waited for had arrived. Even in a crowded temple, his hope was unmistakable.

Then there’s Anna, a widow who’s life had revolved around devotion to God ever since her husband had died decades before:

There was also a prophet, Anna, the daughter of Penuel, of the tribe of Asher. She was very old; she had lived with her husband seven years after her marriage,37 and then was a widow until she was eighty-four. She never left the temple but worshiped night and day, fasting and praying. 38 Coming up to them at that very moment, she gave thanks to God and spoke about the child to all who were looking forward to the redemption of Jerusalem. Luke 2:36-38 NIV

Anna knew something was coming, and that something was a Someone – the promised Messiah. This woman, so in tuned with the Spirit of God, wouldn’t miss his salvation right under her nose. When she saw Jesus, she started preaching – redemption had arrived in the form of a newborn baby.

As we entered the week leading up to Christmas, I’ve thought a lot about Anna and Simeon. Advent is the season of waiting for the promised Savior, and these two ordinary saints spent their whole lives waiting for their ultimate hope to arrive. Their hearts were tuned to see, even in the midst of the busyness of their own religious devotion, the miracle right in front of them.

Just like in the temple of old, Jesus often makes his way unnoticed through our churches. He arrives in small, unassuming ways among us, and unless we are like Anna and Simeon, we’ll walk right past the very One for whom we’ve gathered in the first place.

Yesterday morning, I saw him in the quiet prayer over a sick volunteer struggling to make it through. I saw him in the conversation with the man who was celebrating his next step in his recovery program. I saw him in children coloring their pictures in Kids Ministry. I saw him in the bread and juice we bought at the grocery, that somehow become the holy reminder that we’ve been made new again. I saw him in the dinner plans made between new friends. He was arriving, moment by moment, in unlikely places.

And he’s still arriving – but not always in the ways you think. What sets Anna and Simeon apart was that hope gave them a reason to look for what their hearts were waiting for. They were waiting, expectant, eyes wide open for hope to arrive.

How do we miss him? We look in the wrong places, or worse yet, we don’t look at all. We look for the ways that the kings of this world arrive; in the extravagant, in the flashy, in the powerful, attention-grabbing spectacle. And because our world has trained us to look for Him in the spectacular, we’ve grown accustomed to walking right past Him in the ordinary. There’s a reason he arrived in a manger and not in a palace. There’s a reason he was announced by shepherds and not politicians. He’s not that kind of King. He’s not here to prop up the powerful, but lift up the powerless.

Advent invites us to slow down and open our eyes to see the arrival of Jesus in unlikely, unnoticed places. We are prone to lift our eyes towards the spectacle, and if we’re not careful, the Savior of the world will pass right by us, unnoticed. What a tragedy to miss Jesus, right in the middle of Church. Worse yet, to miss him at Christmas.

He is arriving still. Like Anna and Simeon, remember your hope. Remember what you’ve been waiting for. And with your hearts tuned to His promise, open your eyes. He’s here.