How Should We Watch The News? Staying Informed Without Losing Our Souls 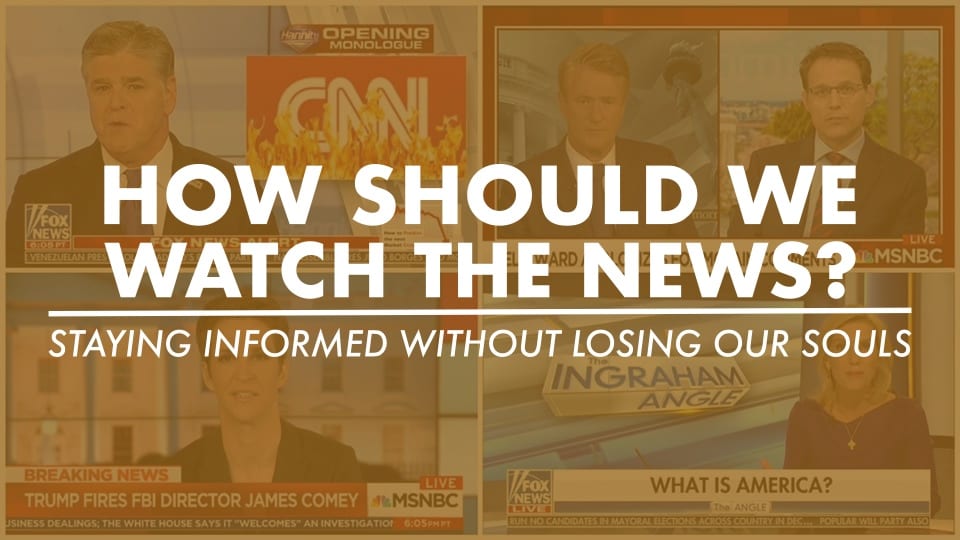 In every generation and culture, disciples of Jesus have had the task of discerning the challenges and hindrances to their faithful witness in society. Across cultures, the temptation to “conform to the patterns of this world (Rom. 12:1)” and compromise the primacy of our kingdom identity has led to both inspiring stories of holy defiance and heartbreaking stories of complicity with the powers of evil. In modern America, this discernment is needed now more than ever. With the ever-shifting sands of culture and power more volatile than ever, Christians need honest and sober conversations about the ways we engage the world around us.

And in 2020 America, the issue of how we consume our news media is one of the primary discipleship challenges of our day. But wait – what does watching the news have to do with discipleship? Well… everything. You see, discipleship is the process by which we are formed to see our world. It is far more than the sum of our belief statements, encompassing our thoughts, motivations, habits, and hopes for the future. To be a disciple of Jesus is not simply to “invite him into your heart,” but to come under his Lordship in every sphere of life – our politics, our finances, our relationships… everything.

Which leads us to this sobering truth: I can go to Church every week, read my Bible, and pray, and yet still be far more discipled by voices that have far more power and influence on me. This is especially true in our polarized political climate. In March, I made put together an informal survey around the political engagement of my Facebook friends. Among 62 respondents, over half consumed 1-3+ hours of some form of political content and media a day. That’s between 7-21+ hours a week. Even if you manage to spend 30 minutes a day in quiet time with God, 2 hours at a community group, and 1 hour for Church, that’s still only 6.5 hours a week. The result? For too many, media consumption and political content do far more to disciple us on a weekly basis than our devotional life with Jesus.

So am I advocating for a posture of withdrawal that cuts us off from the world and its news? Not at all. In 2020, we can’t function and engage our world without some form of media and news in order to stay informed and aware of our surroundings. But in doing so, we need to do so with the utmost caution and discernment in the process, knowing that it’s not a matter of if we are being discipled – but rather who is discipling us. As a pastor, I believe that a politically diverse Church that crosses the dividing lines laid down by the world is a signpost of the Gospel in our world. And in a Church of this kind, our news sources will likely reflect our diversity. In saying this, my aim is not to tell you what and what not to watch (although I have my opinions). My earnest prayer is to help you, along with other believers, practice discernment in how we consume the news we do – as well as have honest conversation about the spiritual impact it makes on us.

In order to do so, I’ve written down 6 questions that I pray help us discern how we, as disciples of Jesus, can discern how we’re engaging the news media. These are by no means perfect, but hopefully they can offer some guard rails as we seek wisdom together.

1. Am I consuming news that is fundamentally distorted by partisan bias? Emily Dickinson famously said, “Tell all the Truth, but tell it slant.” It’s not a question of whether some media outlets intentionally stretch the truth or misrepresent the whole story. There are, after all, countless examples of this from every political persuasion. The deeper issue is this: why am I beholden to this bias? This raises two questions. First, am I seeking out sources that have been proven to have less bias towards a political agenda in order to get a fuller picture of the truth? And second, do I overlook or dismiss the bias of my preferred news source because it confirms what I already want to believe (FAKE NEWS!)? These are hard questions worth considering. One helpful resource is this chart which maps the bias of media sources based upon research.

2. Is my attempt to stay “in-the-know” negatively impacting my mental and spiritual health? Our collective anxiety as a society is through the roof. Between the COVID-19 pandemic, the racial unrest, the political polarization, and the everyday stuff we deal with as well, there’s enough fear and anxiety to go around. And when everything feels out of control, being informed about the latest news can give us a sense of something we can control. But there’s a difference between being informed and being engrossed. We have to discern not only what we watch, but how much of it we watch. We are wise to set limits on the amount of news we consume for the sake of our mental and spiritual health.

3. Does the news I am consuming rely on fear, anxiety, and anger to draw – and keep – my attention? In his book “Trust Me, I’m Lying” self described media manipulator Ryan Holiday pulls back the curtain on the sordid motivations of those who do anything to get – and keep – our attention. In it, he tells us that “The most powerful predictor of what spreads online is anger.” If we’re honest, we’ll notice how much some news media outlets intentionally use fear and anger to stir our anxiety – not to keep us informed, but to keep us watching. If you’re watching or reading some form of media, pay attention to how it makes you feel afterwords. If you’re consistently pushed towards anger about “those people” or fear of what “they” might do, it’s time to take a sober look at how it’s shaping your spiritual life.

4. Do the news personalities I listen to regularly dehumanize and demonize those who don’t think, act, or vote like I do? Political disagreement is inevitable. And when handled well, it can be healthy! But when we move beyond simple disagreement into demonizing and dehumanizing our opponents, we’ve undermined our Christian witness. Not only do we believe that “our struggle is not against flesh and blood (Eph. 6:12),” we have the command of Jesus to love our enemies – which includes our political and ideological opponents. If we support and passively normalize the demonization of those with whom we disagree, we sully our witness in the noise of partisan culture wars. In fact, I believe we honor God and neighbor best when we fairly represent the other side in a way they’d affirm. As Tim Keller says, “Never attribute an opinion to your opponents that they themselves do not own.” This ensures that, even when we disagree, we can stand with integrity towards those with whom we differ.

5. Does the news I consume regularly present a politician, a political party, or our country as my functional savior? Just this week, a prominent news commentator on a very popular network told his audience that they needed a “defender,” and that certain political party was “their only shield.” Leaders from both parties have presented America as “the hope of the world.” And many have presented presidents and leaders as our defense and only hope in the fight against “the enemy.” Friends, this isn’t politics. It’s idolatry. Both Christian nationalism (American is superior and the hope of the world) and the political deification of leaders to “save us” are direct challenges to our allegiance to Jesus. We can love our country and support our political aims without offering the hope and allegiance that belong to Christ alone.

6. Is my love for my neighbors and enemies inhibited by continuous, antagonistic language and postures towards those with whom I disagree? Do you know one of the worst things that can happen to our fear-driven, partisan agendas? Meet the other side. So much of the partisan news cycle relies on stereotypes, misinformation, and mischaracterizations that often fall away when we get to know the people on the “other side.” Turns out, they aren’t as bad as you thought. They love their country, too! I fear that one of the saddest side effects of the antagonizing nature of partisan news is that it further isolates us from those who are unlike us. As followers of Jesus, we should be resolute in our commitment to not allow the polarizing characterizations of an entire group of people hold more sway than our personal interactions with their lives and stories. If watching the news is causing me to feel hatred, bitterness, or indifference towards my neighbors who are different from me? That’s a problem. I should find another source of information.

We’d be wise to heed the challenge of James 1:18: “My dear brothers and sisters, take note of this: Everyone should be quick to listen, slow to speak and slow to become angry.” The truth is, the world is chaotic, ever-changing, and often confusing. And too often, news commentary presents itself as making sense of this chaotic world, but in reality, it’s only part of the story – often the part they want you to hear without the parts they don’t. So whether Democrat or Republican, Fox News or MSNBC, right or left, times like these should drive us out of arrogance and into humility. How we see the world is limited in its scope. We don’t and often can’t know every side of the complexities that surround us. If news commentators claim to know all of it? Well, let’s just say their pants are probably on fire. So let’s commit ourselves to be listeners first – not simply to the side we want to hear, bu the other side as well.

On top of this, I’ve known several journalists and news reporters locally who are phenomenal, honest people who are simply doing their jobs. When we go after “the media,” let’s be careful to remember that there are image-bearers behind the stereotypes we present. We’d be wise to pray for journalists and news anchors, who often find themselves in the cross-fire of partisan agendas. They, too, are not the enemy.

Finally, I don’t write this as a media expert or a political junkie, but rather a pastor that wants his Church to give their fullest allegiance to Jesus, so that he is the lens through which we understand our world – not the other way around. The temptation to place ultimate hope in a politician or party is real, and it’s grown to be one of the greatest challenges facing the American Church in our time. And if we’re not diligent, we’ll succumb to shallow, loveless visions for our world driven by fear and fostered in isolation. It is my prayer these questions might foster reflection and “spur us on toward love” as we seek to be the faithful witness we’ve been called to be.