Church, We Need A Better Story 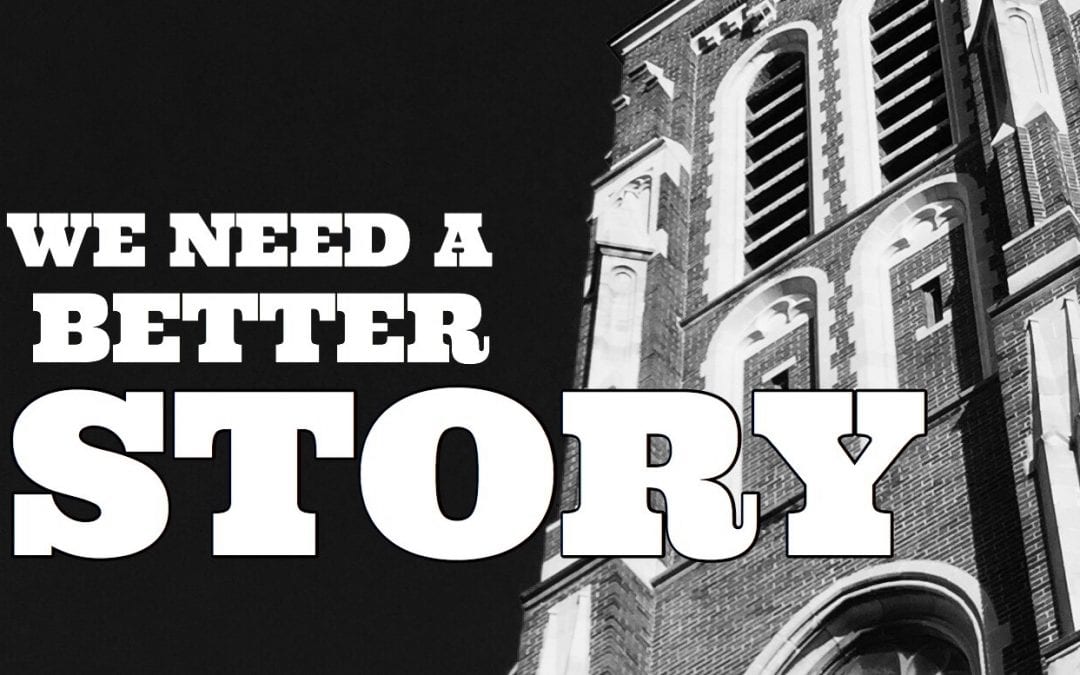 It’s almost every week now. A text, a meeting over coffee or drinks, or maybe lunch, and it goes something like this: “Justin, I’m not sure what I think about Church anymore.”

Enough ink has been spilled and enough blogs have been posted about the decline of Church attendance in America, along with the corresponding articles about what we have to do to to “reach” them and get them back. Marketing strategies are formed, demographics are targeted, and programing shifts are made.

Yet as a member of a generation that has been advertised to from birth, we smell inauthenticity a mile away. Most of the people I know don’t want to be “reached.” If they are to engage the idea of Church again, they want something more.

I spent most of my time in ministry thinking the answer to every question was how we “did Church.” It was a strategy issue. I looked for innovation around every turn, and read as much as I could from theorists and practitioners on the front lines. Some things worked, others didn’t.

As we’ve read through Acts in our series “Throwback,” I’ve been struck by the lack of, well, strategy. In a culture equally or more secular than ours, they didn’t seem to be wrapped up in the questions we asked. On the contrary, when the Holy Spirit was poured out, the Gospel was preached and a compelling community was formed that grew all the more every day (Acts 2).

The perceived story of Christianity I commonly encounter these days goes something like this: you are bad. The world is bad. Jesus came to make you good, so that you could one day leave this bad world and the bad people behind. In some form or fashion, this has been the Christian story many have grown up around.

So if this story is true, what kind of Church forms from it? This is the Church that’s only worried about saving souls out of the bad world, so the only job they have is to try and be good people away from the bad people until they die, when God takes them out of the bad world. They don’t have to worry about the brokenness of the world around them. If God only is concerned with our souls, we don’t have to worry about issues like racism or the environment or poverty. If we are ultimately escaping it when we die, we’ll live to escape it while we live.

This is the story so many are walking away from. And I don’t blame them. But this is not our story.

What Is Our Story?

But sin brought brokenness into our world and into us in the form of death. The Bible says we are spiritually dead in sin, and that the decay and death we see in the world around us is a direct result. No matter how many times you hear it at funerals, death is not a natural part of life. We were not made for death. We were made for life.

When Jesus came, he didn’t see the world through the lens of good and bad people. In fact it was those who saw themselves as the “good people” that took the brunt of his message. Those “good people” didn’t seem to like Jesus, because he spent his time loving the “bad people” of the day. Jesus showed what it meant to be fully human, fully alive without sin. Jesus was the fullness of life in human form. So when he died on the cross, he took death with him to the grave.

Three days later, new creation began with a resurrected Jesus – not a floating soul, but a resurrected body. When he poured out his Spirit on the Church, a resurrection people were born, made not to escape the brokenness around them, but to bring life wherever they were. They were a restored people who were empowered to restore the world.

A New Story, A New Church

That, my friends, is our Story. A story that powerful – what we call the Gospel – demands the kind of community that takes it to heart. The Church that forms from that Story wants to see people rescued from death and brought to life. It also wants to see the world around it renewed and restored in love. It cares about the needs and struggles of its neighbors. Because the Story they believe ends not in escape but restoration, they believe they’re lives together are meant to tell the Story they believe. Those who live that Story together, though imperfectly, are the people we call the Church.

As I said Sunday night, I’m not pleading with you to invite the Church into your heart. . That Story forms a compelling community that is good news to the world around them. That is what we are aiming for at Restoration. Almost 5 months in, we’re learning not to be a perfect example, but a living one.

If you’ve believe a lesser story about Christianity that’s left you feeling on the outside looking in, you’re in good company. Come join us at Restoration. We’re learning to live this Gospel Story together, one day at a time.