Choosing Barabbas: A Response To The Capitol Insurrection

Like most of you, I sat Wednesday in stunned silence watching the events unfold in Washington DC, absolutely heartbroken as armed rioters and terrorists overwhelmed the capitol with violence and force. And to add insult to injury, many of these rioters carrying flags and banners with the name of Jesus on them. Crosses were carried onto the capitol grounds and erected in the midst of the mayhem. And there –  on the front of the capitol, unfurled by the crowds that pushed pass the police and climbed the stairs, was a banner that read “Jesus 2020.” 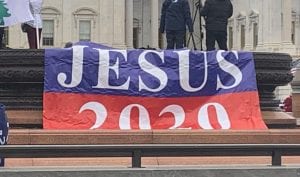 If ever a banner could sum up both the tragedy and the absurdity of this moment…this banner does. I found myself sleepless that night in bed, wondering about all of the beliefs and narratives and convictions that lead to a moment like this – a moment where, quite literally, God’s name is taken in vain. What is the theology that forms its foundation? If you dug down to the bedrock, what would you find?

During my last few days of quarantine, I read a wonderful biography of Dietrich Bonhoeffer called “A Spoke In The Wheel.” The book describes the internal struggles of Bonhoeffer dealing with the growing alignment of the German Church with the Nazi party. Slowly but surely, the leaders saw a fork in the road. They could either lose power, finances, and influence… or compromise their convictions out of fear of what we might lose. The vast majority chose fear and compromise. The Church, from that point forward, was judged by the degree of its patriotism and loyalty to power. The very belt buckles of nazi soldiers leading millions to the gas chambers read “God with us.”

We Have A Choice

Friends we can’t say that “couldn’t be us.” Because it could be, with all of the best intentions, one compromise at a time. It reminds me of a scene we find at the end of Jesus’ life – a scene recorded in all four gospels. He’s just been betrayed by Judas and arrested, and now he stands before the Roman governor, Pilate.

Meanwhile Jesus stood before the governor, and the governor asked him, “Are you the king of the Jews?”“You have said so,” Jesus replied. When he was accused by the chief priests and the elders, he gave no answer. Then Pilate asked him, “Don’t you hear the testimony they are bringing against you?” But Jesus made no reply, not even to a single charge—to the great amazement of the governor. Now it was the governor’s custom at the festival to release a prisoner chosen by the crowd. At that time they had a well-known prisoner whose name was Jesus Barabbas. So when the crowd had gathered, Pilate asked them, “Which one do you want me to release to you: Jesus Barabbas, or Jesus who is called the Messiah?” Matthew 27:11-17 NIV

Just days earlier, Jesus has ridden into Jerusalem triumphantly, hailed as the coming Messiah by crowds who sang his praise. And now those same crowds were given the choice between two Jesus’ – Jesus Barabbas and Jesus of Nazareth. We don’t know much about Jesus Barabbas except for the details we have in the Gospels. Mark and Luke both tell us he was an insurrectionist who was guilty of murder in a violent uprising. Barabbas represented the violent Jewish nationalism. He was a Zealot, a group of people who believed that the kingdom of God would only come when the evil, pagan rulers were removed by whatever means necessary – including by violence and force. And don’t get me wrong – this Jesus had a gospel. The gospel of Jesus Barabbas is salvation by power and might.

Contrast this with the other Jesus – Jesus of Nazareth. For the last 3 years, this Jesus was announcing a kingdom that is good news to the poor, the captive, and the oppressed. A kingdom that welcomed sinners and dined with tax collectors. And it was a kingdom that was a threat to the religious elite and the powerful, not because he was trying to grasp power for himself, but because he had the audacity to give it away. He told Pilate: “My kingdom is not of this world. If it were, my servants would fight to prevent my arrest by the Jewish leaders. But now my kingdom is from another place.” “You are a king, then!” said Pilate. Jesus answered, “You say that I am a king. In fact, the reason I was born and came into the world is to testify to the truth. Everyone on the side of truth listens to me (John 18:36-37).”

Here those words – Jesus did not need his followers to defend him by force. Instead, a kingdom was coming that was not from this world, but it was for this world. By the standards of kings and rulers both then and now, this was weakness. Real leaders would take a stand! Real leaders would fight for what they believed in! But Jesus… didn’t. Contrast this with his words from Matthew 20 Jesus says: “You know that the rulers of the Gentiles lord it over them, and their high officials exercise authority over them. Not so with you. Instead, whoever wants to become great among you must be your servant, and whoever wants to be first must be your slave— just as the Son of Man did not come to be served, but to serve, and to give his life as a ransom for many (Matt. 20:25-28).”

Which Jesus Will We Choose?

The Jesus flags and banners that flew in that violent uprising on January 6th were the banners of Jesus Barabbas. They preach Gospel of power and success at all cost. In truth, much of American Christianity is guilty of the idolatry of power. We have bought into the lie that the kingdom of God will only take root when it is enforced and protected from on high. And in doing so, our politics becomes our religion. Presidents and congressmen and supreme court justices become our priests. Cable news talking heads become our worship leaders. All for what has become the cross-less, stand-in savior: power. This is the gospel of Jesus Barabbas.

In truth, power itself never been the problem – it’s where we go to find it. We have forgotten that we follow a crucified King. When God wanted to confront the powers and principalities of this world, to turn the might of God against the sin and shame of creation… He died. You see the cross is not just the source of our salvation, it is the shape of our lives in and for the world. We are a cruciformed people. And because the most powerful act in human history is a man laying down his life for his enemies, I don’t have to win. We’ve already won! The all-powerful God in Christ has leveraged His power for us, by his love, so that our love for our enemies would be stronger than our desire to overcome them. This is the Gospel of Jesus Christ that we proclaim.

I believe we are at a crossroads as Christians in America. Jesus Barabbas wants us to claw our way into the halls of power. But Jesus Christ wants us to take up our cross. He tells us “Whoever wants to be my disciple must deny themselves and take up their cross and follow me. For whoever wants to save their life will lose it, but whoever loses their life for me will find it. What good will it be for someone to gain the whole world, yet forfeit their soul (Matt. 16:24-26)?” What good will it be to gain America, but lose our soul? To gain the White House, but lose our soul? To take control of Congress and the Supreme Court, but lose our soul? Friends, together, we must turn from the Jesus of the sword and turn to the Jesus of the cross. The problem isn’t just “out there.” It’s us, and we need to repent. As well intentioned as our values and beliefs may be, a country of Christian values without a Christlike Church is meaningless. The response to this moment is to remember who we are: the people of Jesus. Together, we are the politics of God in this world. As Stanley Hauerwas has said:

“The church does not exist to provide an ethos for democracy or any other form of social organization, but stands as a political alternative to every nation, witnessing to the kind of social life possible for those that have been formed by the story of Christ.”

This is my prayer: that we’d be the living alternative to the violence, coercion, and fear that has risen in this land. We cannot waste the urgency of this moment. Whatever change will happen in this nation will – and must – start with us.